1 hours, 45 minutes
Richard and Steven are streaming live from San Quentin State Prison for faking Stevens death in order to set a trust fund for The Church of the Neon Bible. They beg viewers to send money in order for them to bail out of jail. During the episode, they are terrorized by Ciggas who serves as the de-facto antagonist of the episode. The lawyer "Robert Shapiro" (who also helped out O.J Simpson) is heard running up to them to bail out Burnish and Chilton before the episode cuts to black. 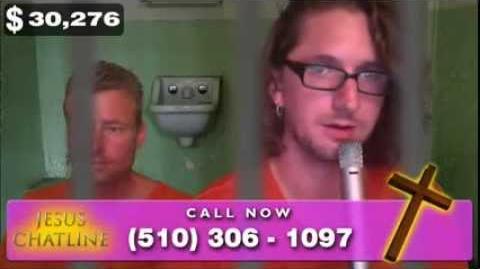 Retrieved from "https://neonbible.wikia.org/wiki/Prison_Edition_(Episode)?oldid=5311"
Community content is available under CC-BY-SA unless otherwise noted.